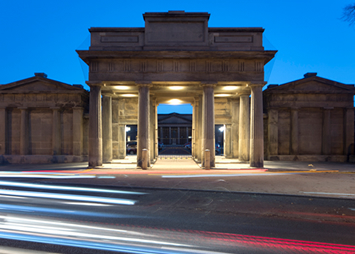 Working in conjunction with Grosvenor Construction, Ace Electrics carried out a large project, to restore one of Chester’s most historic buildings, the Propylaeum, to it’s former glory. Find out more about the project below:

A major conservation project for one of Chester’s historic and important buildings began on Monday February 22nd 2016, a project which in total cost £679,000.

The entrance way to Chester Castle complex – or the Propylaeum as it is formally named – received a grant of £404,000 from Historic England, £200,000 from Cheshire West and Chester Council and £75,000 from WREN.

Work began on the Grade I listed structure in 1811 and was finished in 1815. The 200-year-old sandstone structure is a massive gateway in the Greek Doric order, flanked by two smaller pedimented lodges. It was designed by Chester-based architect Thomas Harrison.

The project was completed in December 2016, below we have listed a number of links which document it’s progress:

Grosvenor Construction – “A gateway to another world – the Propylaeum”

Get in touch with us…

Or, email our team at: